A history as rich as the taste!

There are a few weeks left until Thanksgiving! It’s almost time for turkey and football, and all the other beloved traditions of the day. The holiday meal brings to mind favorites such as stuffing, mashed potatoes and cranberry sauce. These are great – but everyone knows the best part of Thanksgiving dinner is the dessert! One standout is the always unforgettable pumpkin pie. Can you even imagine Thanksgiving without it?

Pumpkin pie looks a little different today than when it first originated. A very early recipe called for a hollowed-out pumpkin to be filled with milk and spices. It was then cooked directly over a fire. This was most likely what was consumed at the first Thanksgiving. The pumpkin shell was used as a makeshift crust – there weren’t any ovens available to bake the crust we know and love today.

Over the years, other recipes emerged and consisted of a wide variety of ingredients. Some recipes called for rosemary and thyme. Others even featured apples and raisins as extras. In the first American cookbook, it mainly consisted of recipes that originated in America. This publication included a pumpkin pie recipe that used cinnamon and nutmeg. These spices are important additions and are generally used today.

It was in a women’s magazine that pumpkin pie became synonymous with Thanksgiving. When Thanksgiving was declared a national holiday, a magazine editor wrote an article about it. The magazine ran recipes alongside it, including one for pumpkin pie. The rest is history! The pie has cemented its place as a delicious Thanksgiving dessert, and there’s only a few weeks left until we can eat all the pie we want!

Don’t wait – order one today! Our Classic Pumpkin Pie is rich and creamy and has a delicious crust. Have one delivered for your Thanksgiving dinner, or send one to your relatives who live far away. We have many other pies if pumpkin is not their favorite. Everyone deserves a pie this holiday! 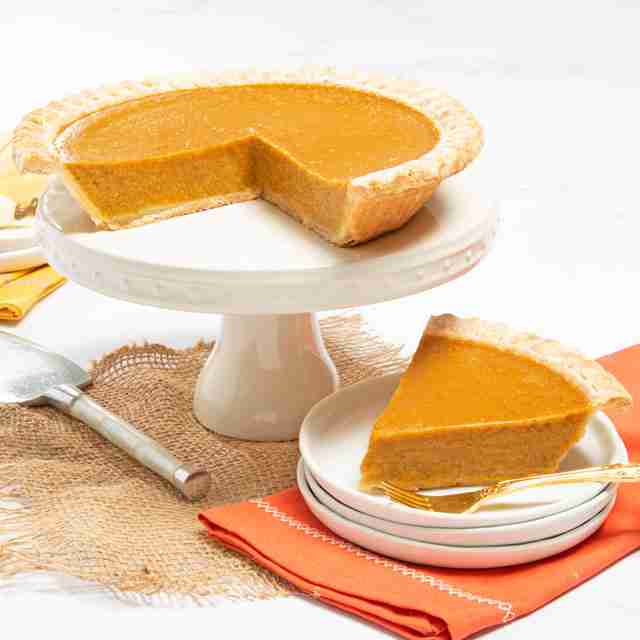